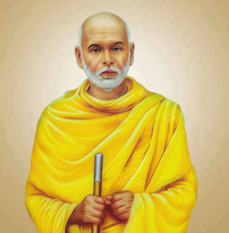 Sree Narayana Guru was born under the star 'Chathayam' in the month of 'Chingam' in 1856 AD (1032 of the Malayalam calendar) in the village of Chempazhanthi in Trivandrum, the capital of Kerala as the son of Madan Asan, a farmer, and Kutti Amma. Yet Gurudev reportedly told some of his followers that he was actually born in 1030. When his 60th birth anniversary was being celebrated 1916 he laughingly said "my 60th birthday (sashtabhdhapoorty) was quite a while ago.

His parents, ‘Madan Asan’ and ‘Kutty Amma’ endearingly called him ‘Nanu’. At the age of five, he began his education in the neighboring school in the old “Gurukula” model.'Madan Asan' was also a teacher ("Asan") who was learned in Sanskrit and proficient in Astrology and Ayurveda.